Anticipation For The Stuff We’re Awaitin’

The deluge of year-end lists can make for depressing reading. Sure, critics love compiling their favourite films, CDs, books and cultural events. And, okay, some readers use them as suggestions for holiday gifts. But the lists are often inadvertent reminders of the passage (and one’s waste) of time. Instead of thinking, Whew, I can still watch The Beat My Heart Skipped on DVD, most of us are forced to look deep within and ask, Did I really miss The Syringa Treeso I could watch a rerun of Two and a Half Men ?

I don’t want to bum you out, so here are seven things to look forward to in the first half of 2006 — before they snag a spot in the inevitable December roundup.
1. PuSh International Performing Arts Festival. Jan. 10 to Feb. 4. Groundbreaking film, music and theatrical works are scheduled throughout the city thanks to co-curators Norman Armour and Katrina Dunn. It’s quite a lineup (see www.pushfestival.ca), but the catchiest show titles are undoubtedly Famous Puppet Death Scenes by Calgary’s The Old Trout Puppet Workshop, which promises to “cure your fear of death,” and Sexual Practices of the Japanese , a trilogy of plays by Maiko Bae Yamamoto, James Long, Manami Hara and Hiro Kanagawa that explores myths about contemporary Japanese culture.
2. Stan Douglas: Inconsolable Memories. Jan. 20 to March 19. The latest exhibition by the super-cerebral photographer and video artist features his series of photographs taken in Cuba, as well as the film Inconsolable Memories , based on the 1968 Cuban masterpiece Memories of Underdevelopment, by Tomás Gutiérrez Alea. Morris and Helen Belkin Art Gallery, 1825 Main Mall, 604-822-2759 .
3. They Shoot Horses Don’t They? On Feb. 21, the local band’s first album will be released by Kill Rock Stars, the legendary indie-rock label based in Olympia, Wash. The group combines a three-piece brass section with electric bass and drums to play its infectiously maladroit, marching-band variation on punk rock.
4. The Bloody Clean Up, or The Lamentable Tale of Marie-Antoinette. March 14 to 18. Billed as “a tragic comedy narrated by the decapitated head of Marie, who remembers the day of her beheading while remaining in denial about her impending doom,” this play stars Manon Beaudoin from Leaky Heaven Circus, a kind of modern-day vaudeville act. Vancouver East Cultural Centre, 1895 Venables St., 604-251-1363 .
5. Story House. In April, Knopf Canada will release the second novel by Timothy Taylor, whose Stanley Park was a bestseller, a Giller nominee and a One Book, One Vancouver pick by the Vancouver Public Library. Taylor’s much-anticipated second novel tells the story of two combative half-brothers, Graham and Elliot, who set out to restore a house designed by their father, Packer Gordon, a famous architect.
6. World Cup Fever. June. When Canada goes for another gold in Olympic hockey next month, the red-and-white flags will be ubiquitous in every bar and intersection. This summer, however, when the World Cup is held in Germany, neighbourhoods will splinter off according to their ethnic roots. Which will erupt in a spontaneous parade this year? In 2002, the West End was overtaken by crowds celebrating Korea and its Cinderella semi-final run. But 2006 could go to fans of soccer-superpower Brazil, who gather to watch in the coffeehouses of Commercial Drive and cap off each victory with drumming and dancing.
7. Homemade Polygonals. July. This exhibition brings together five emerging artists — Mark Delong, Joe Haley, Eli Boronowsky, James Whitman and Matthew Brown — who reproduce crisp, digital images of Photoshop and 3-D animation using deliberately handmade means, such as drawing, painting and sculpture.
“Perhaps it’s a reaction to all the fancy, highly polished manufactured pieces artists have been making,” says art writer and independent curator Lee Henderson. “The kids are taking conceptual stuff back to a process of mark-making, embracing clumsiness, rough edges, and a daily practice of drawing.” Bjornson Kajiwara Gallery, 1727 W. Third Ave., 604-738-3500. 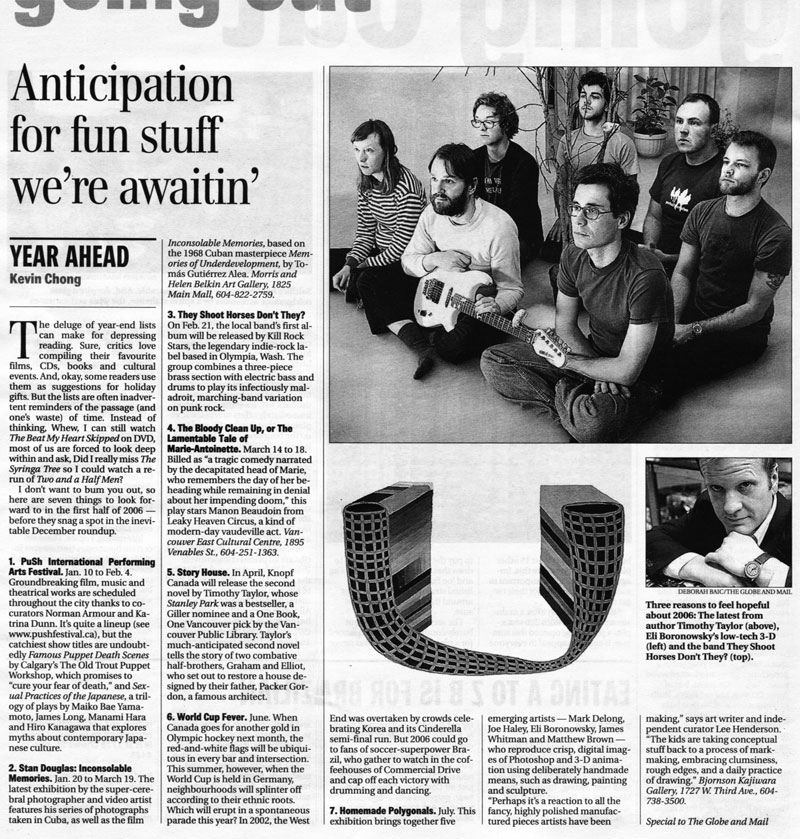