Young Artists Are Mad About Paint

Painting has been declared dead a few times over since Marcel Duchamp drew a mustache on a Mona Lisa postcard in 1919. And once again, it’s making a resurgence internationally and in Vancouver. “There’s a lot of excitement in this town about painting,” says Neil Campbell, guest curator of Paint , a Vancouver Art Gallery exhibition of works by seven emerging artists, as well as paintings from the sixties onward.

On a tour of the show, which opened last week, Campbell points out works by Vancouver-based painters including Arabella Campbell, Holger Kalberg, Etienne Zack and Matthew Brown. “These artists approach paint differently, but they enjoy making something with their hands,” Campbell says. “It has that sense of immediate registration; like handwriting, it tells a lot about the painter, involuntarily, shall we say.”

Looking at these paintings is like reading diary entries, and it’s especially exhilarating for paint-lovers, since Vancouver galleries have long been dominated by photo-based art. “Photo-conceptualism certainly put Vancouver on the map,” says Campbell, a painter who teaches at the Emily Carr Institute, “and now painting can share the spotlight.”

But is Vancouver mature enough to sustain both genres, or is a shift toward painting at hand? The topic has made for hot debate ever since Vancouver’s world-renowned photo-conceptualists were treated to a rare tongue-lashing in Canadian Art magazine this summer, in an article by Toronto-based writer R. M. Vaughan. He charged the Vancouver art scene with “cerebral emptiness” and called most Vancouver photo-based art “lazy,” “sterile” and “overly dry and academic.”

Some art insiders applauded the piece, while other Vancouver artists, academics and dealers orchestrated an aggressive letter-writing campaign, accusing the Toronto-based magazine of fuelling a “civil war” in Canadian art, and even comparing the critique to Nazi propaganda.

Did these locals protest too much, revealing a diva mentality and perhaps even deep-seated insecurities that painting might trump photo-conceptualism? The Vancouver scene is still abuzz over the issue, and Paint is bound to fan the fires.

Campbell acknowledges that the conceptual “agenda” that has dominated the art world since the sixties was itself a backlash against the macho expressionist painting that became a big-bucks consumer item.

“There was a distancing from painting, [deemed] politically uncool and embarrassing,” he says. “Universities started MFA programs, and academics impressed the hell out of young artists. . . .

“Conceptual artists wrote for each other and it was very successful,” he adds, mentioning internationally acclaimed artists such as Jeff Wall and Ian Wallace. “Painters particularly don’t always have the tools to refute the stamp of academia, so that intellect trumped the visceral hand with the brush.”

Brown, 30, who studied art at the University of Victoria and Concordia University, says he felt “pressure to jump on the concept-driven band wagon.

“But I wanted to be more hands-on,” he says of his practice of putting line drawings through a graphic-design process and then reclaiming the image through painting. “When the hand is involved in the process, it becomes a personal discovery,” he adds. “It’s not detached or cold.”

As the art world warms up to his chosen medium, Brown and his contemporaries showing in Paint are getting a lot of wall time internationally and in Canada. “It’s about time,” says Angela Grossmann, an established artist also represented in Paint .

Although she gained local attention in the mid-eighties, Grossmann has largely made her living selling work elsewhere. “Locally, things are picking up for painting, from absolutely hopeless to okay,” she says, adding that “you have to be half-mad to paint since it’s so time-consuming. But the draw is that [paintings] are such rare objects.”

The next generation is feeling no shame about loving paint, Campbell says. The Emily Carr Institute, a school known for digital arts, has recently filled five senior painting programs. “Young painters are getting into it up to their elbows,” he says. “Painting accesses right-rain functions like rhythm, colour and emotions that are often surprising to the painters themselves. Your hand is talking to you.”

Paint runs to Feb. 25 at the Vancouver Art Gallery 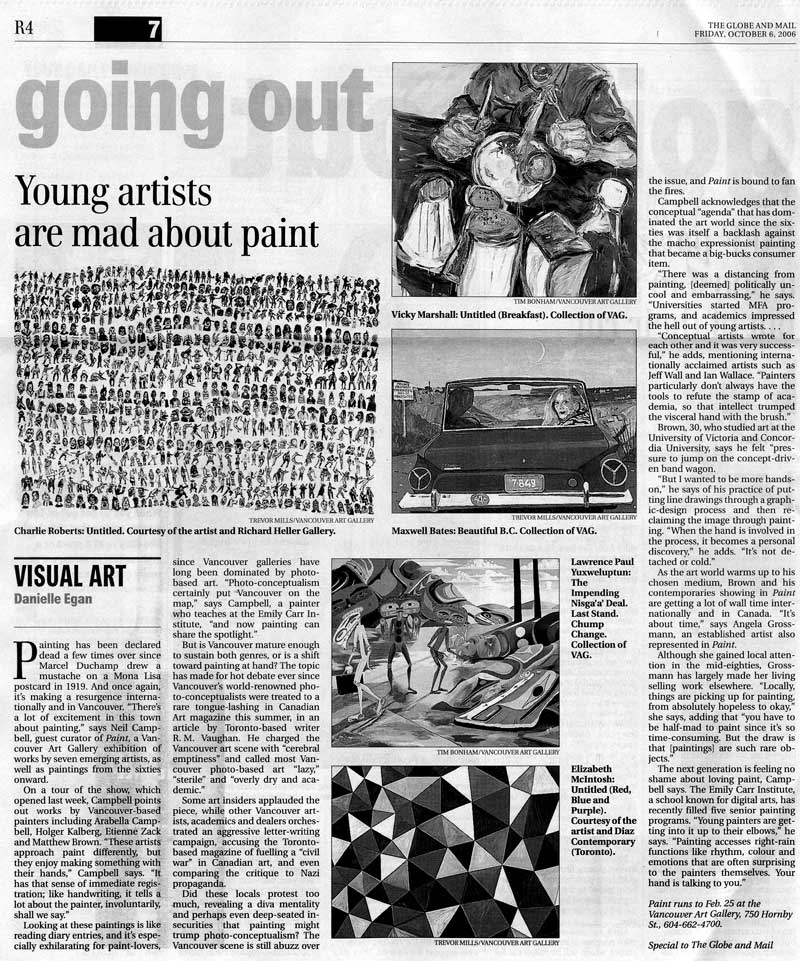