Relax A Little; One Of Your Most Celebrated Nervous Tics Will Be Your Undoing

Featuring work by artists Matthew Brown, Jennifer Chan and Christian Maychack, “Relax a little; one of your most celebrated nervous tics will be your undoing.” is the second in a multi-part exhibition entitled Your Undoing curated by The Venn Diagram (Kristin Weckworth and Jon Davies). We will also present a work by Nadia Belerique as a component of each installment.

Drawn from a poem by Frank O’Hara, our verbose title evokes the image of The Artist as a perennially obsessive character flirting with the risk of psychic and formal unraveling in the fervent pursuit of their aesthetic ends. The artwork thus becomes a kind of working-through, a worried-over wound. This exhibition will bring together three artists working idiosyncratically in painting, sculpture and video; together their works conjure a wide array of gestural tics and anxious processes, which boldy open up avenues for creation and – just as importantly – its undoing.

Toronto-based artist Matthew Brown’s paintings have the appearance of sores festering on the cusp between abstraction and figuration, almost as if he has caught a glimpse of a fleeting moment in between two parallel dimensions. Both internal and cosmic landscapes, his paintings are otherworldly in their structures, compositions and strange – sometimes sickly – colour palette, evoking uncomfortable, mystic feelings. Syracuse-based artist Jennifer Chan’s video capture reflects the artist as she obsessively picks at the “scab” that is the shattered surface of her laptop, which captures her image in its inky black depths. The broken skin is both lesion and mirror, self-destructing further and further as Chan scratches her technological itch. We see her recording the neurotic proceedings with a pocket-sized camera, one piece of technology considering the death of another. New York-based artist Christian Maychack’s recent sculptures made from epoxy clay, pigment and wood perform a playful and visceral materiality. His unexpected and idiosyncratic compositions combine hard-edged and gooey, ravishing and neutered, empty and full, to dizzying ends. Finally, Toronto-based artist Nadia Belerique’s shining new sculptural work plays with the dynamic between 3D objects and 2D images. Mounted near the window, it acts as a filter through which the gallery space can be viewed from the street and vice-versa.

Matthew Brown works with painting and drawing. He completed his BFA at the University of Victoria and MFA at Concordia University, Montreal. Brown was a finalist in the RBC Painting Competition twice and won for Western Canada in 2006. Brown has exhibited throughout Canada and internationally. In Canada; The Vancouver Art Gallery, MOCCA, Toronto, and Access Gallery, Vancouver. He has had solo shows at Clint Roenisch Gallery, Toronto, and Tracey Lawrence Gallery, Vancouver. He has been reviewed in Border Crossings, Canadian Art, Contemporary and Frieze magazines.

Jennifer Chan makes deliberately amateur videos as social commentary on art and gender after the internet. Chan recently had solo exhibitions at the Marshall McLuhan Salon in the Canadian Embassy in Berlin for Transmediale 2013 (de) and Vox Populi (us). She received the Mississauga Art Awards for Emerging Visual Talent in 2008. Chan was born in Ottawa, raised in Hong Kong. She currently works between Toronto and Syracuse, NY.

Christian Maychack was born in Troy, NY and currently lives and works in Brooklyn, NY. He received a BFA from Ohio University and an MFA from San Francisco State University. In 2008 he attended the Skowhegan School of Painting and Sculpture. Among others, he has received fellowships from The Headlands Center for the Arts (2002 & 2006); The MacDowell Colony (2007); The Edward F. Albee Foundation, (2011); and was most recently a New York Foundation for the Arts fellow in painting, (2012). His group exhibitions include, the 2006 California Biennial, Orange County Museum of Art, Newport Beach, CA (2006); Exit Music for a Film, Grimm Rosenfeld Gallery, Munich, Germany (2007); Staging Ground, The Horticultural Society of New York, New York, NY (2010); Dead in August, Site95 at NYCAMS, New York, NY (2012); and Oblique Strategies, Peter Fingesten Gallery, Pace University, New York, NY (2013). Maychack has had three solo shows with Gregory Lind Gallery, San Francisco, CA, and this past September he had his third solo show with Jeff Bailey Gallery, New York, NY.

Nadia Belerique is a photo-based artist investigating materiality and immateriality through the illusion of the photographic image, which is often interrupted in her work by sculptural objects. She received her MFA from the University of Guelph and has recently exhibited at such venues as Diaz Contemporary, XPACE, The Drake Hotel, and the Daniel Faria Gallery in Toronto. 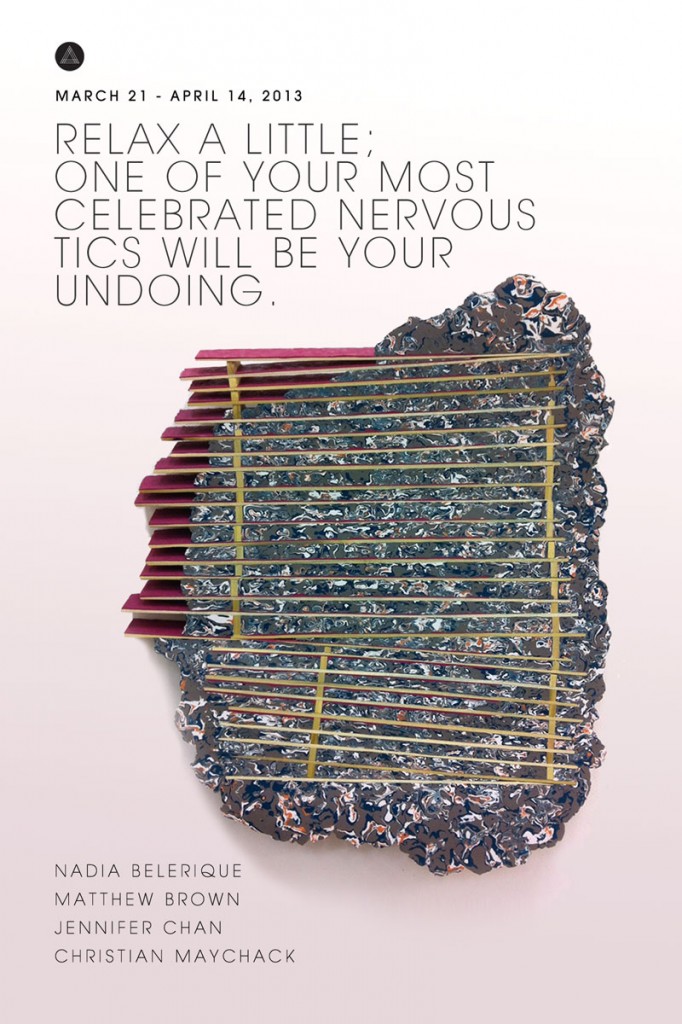