With more than 10,000 works in its collection, the Vancouver Art Gallery has so much art it could never display it all at one time. The solution is obvious: come up with ideas to cherry-pick the best art in the collection and put them on display.

The exhibition Unreal is exactly that: a new show of works drawn primarily from the permanent collection plus a few loans. The idea behind Unreal is to present work that explores the non-rational perspectives on reality, desire and fantasy.

Curator Daina Augaitis said she chose the works with the idea of challenging how we perceive the world. How does the subconscious influence what we see? What does it mean to be influenced by random events? What are the limits of order and acceptability?

“This exhibition presents works by artists who explore beyond the realm of what is considered real,” said Augaitis in her description of the exhibition.

“They aim to unhinge us from our typical views of the world and open our eyes to the marvellous, the fantastical, the weird and even the monstrous.”

Altogether, there are more than 100 works in Unreal but only two videos and a handful of photo-based prints. There are numerous sculptural pieces but by far, the vast majority are two-dimensional works that include collage and oil, acrylic, and watercolour on paper, canvas and other materials.

The exhibition is full of strong, dramatic images and includes many rarely shown works by B.C. artists such as Jerry Pethick.

Interested in perception, he created numerous pieces during his career that explored vision. Landscape-Portrait of Gabriel Lippmann is made of glass and metal found objects from the junkyard on Hornby Island where Pethick lived. The portrait of Lippmann, the French physicist who investigated the multi-faced lens of the eye of a fly, has a block of used grey light bulbs painted with random black dots on the globes giving the impression of how an insect might view the world.

On first viewing Vincent Trasov’s Burned Study from across the exhibition room, it read as an abstract painting. On closer inspection, it revealed a collaged surface made up of printed material that had been singed and burned: an ad or a label for Mum Champagne, the brown edges of a crossword puzzle and bits of words and letters.

No Comment is a contemporary collaboration between Jason McLean and Douglas Coupland. McLean started the process by collecting found writings from his former Downtown Eastside neighbourhood.

Coupland then selected the scribbles and signs about which McLean made drawings. It’s one of those works that impels the viewer to stop and read. One looks like it was written on the back of a coaster: “Clip/I’m at the/No. 5 They wouldn’t/Let me in to/Jimmy’s Show,/Come Rescue me/Hot Rod.” One neatly printed sign says “DO NOT/FIX/IN THE/

DOORWAYS!” on an orange background while “Beggin/4/ Booze” is handwritten on a piece of torn brown cardboard. The text, plus McLean’s urban doodles in black and baby blue, offer brief glimpses into the ongoing narratives of strangers.

Unreal is full of numerous striking visual relationships created by Augaitis through her selection and placement of art works next to each other. My favourite involved two works by artists who were new to me. Hanging on the wall is a self-portrait by artist Jiri Kolar made out of coloured magazine paper.

All scrunched up and distorted, it looks like Kolar’s image had been wrinkled like a bedsheet fed through the roller of an old washing machine ringer.

Next to it is Marlo Pascual’s digital print of a face broken into two pieces: the top part of the face is leaning against the wall, while the bottom part has been separated entirely and is lying flat on the floor with a plant on top. The juxtaposition of the two works deconstruct and question the photographic image and its two-dimensional representation of three-dimensional space.

Also featured is one of Attila Richard Lukacs early skinhead paintings from 1985.

The young man is behind bars and offers a bunch of grapes to the viewer as an offering that’s as juicily provocative as a boy from a Caravaggio painting. It’s easy to get lost looking at Marcel Dzama’s watercolours that depict a contemporary Grimm’s fairy tale world of innocent, naif-like figures in threatening circumstances.

My nod for the most disturbing image goes to David Mayrs Anaheim, USA. An acrylic on canvas painting, it depicts a fat man holding the hand of a skinny child in front of a California background framed by curtains. They’re both wearing nothing but Mickey Mouse ears and Tarzan-like loincloths. They look like they’ve been caught in the middle of something unseemly — exactly what isn’t specified, which makes it all the more disturbing. 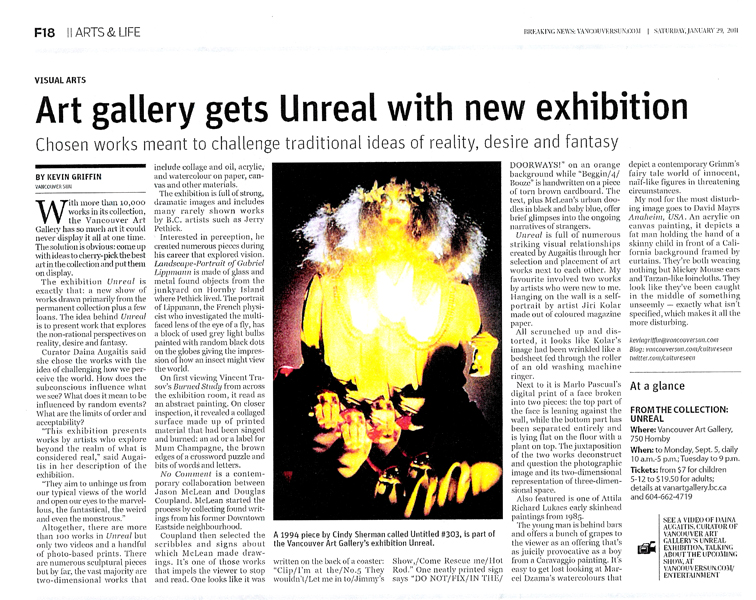