Enclosed Encounters Of A Strange Kind

Feature and interview with Robert Enright.

Matthew Brown likes to take the viewer into unfamiliar territory. The Vancouver-based artist and member of the collaborative drawing group The Lions conjures up “uncanny,” an old Surrealist term, when he talks about his work. “I’m using it to give a sense of familiarity. The image refers to something that doesn’t exist but it seems like it does.” Brown was especially taken by an exhibition of imaginary portraits Janet Werner exhibited at the Contemporary Art Gallery in Vancouver in 1998. “Even though they were invented, I thought they were people I knew.”

Since then, he has found a way to come up with his own imaginary portraits. Brown has a cache of what he calls “drunken drawings,” works that aren’t good enough to stand alone but that are good enough to feed into the computer as the raw material for painting ideas. He scans the drawings into his computer and subjects them to the same transformative programs. “It gives me a brand new form and most of the time you’re not able to see the similarities between the line drawing and the thing the computer made. It’s bizarre, like the scene in The Fly where he goes in with the fly and what comes out is something totally different.”

The curious thing about these drawings is the range of associations they provoke; they can resemble generic insects, automated anime or, in the strangest coincidence of all, West Coast Native designs. “I really don’t know what to think of that similarity. They’re usually very beautiful abstract forms, often with a decorative element that makes them seem kind of baroque.”

Brown admits that he tends to “anthropomorphize everything.” In addition to paintings that seem like abstractions, he also makes works that include figures in strange landscapes. While viewers may regard them as curious combinations of the recognizable and the unfamiliar, Brown tend’s see them in a unifying light. “In some of the figure paintings, there are objects that people think fare noise or abstract marks. But to me they’re always some sort of representation of an object.”

Brown’s choices for his representation, paintings are intriguing. All the figures (which sometimes put you in mind of Marlene Dumas; at other times, Eric Fischl) are male nudes. “I thought that using the male was easier than using the female nude because it’s got much less baggage. I wasn’t thinking of sexuality at all, and I wasn’t interested in get ting into the history of the male gaze.” What he does get into is a new history, a purposeful dissonance in which nothing, from the colour to the form, is obvious. He ends up being the youthful pater unfamilias of the strange.

Matthew Brown will have an exhibition at the Khyber Centre for the Arts, Halifax, Nova Scotia, in February 2006. 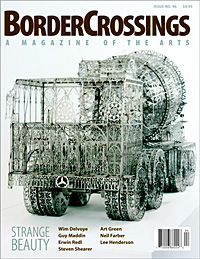