Review of Solo Exhibition at 304 Days

Figuration, still life, abstraction- these words all describe the new paintings that appeared in Matthew Brown’s spring exhibition at 304 Days. When viewing Brown’s compositions, each term claims equal weight, and this complexity demands a second look. Coupled with the artist’s varied mark making, this collapse of genres gives the compositions a curious physicality. They are familiar yet foreign; colours and shapes float, burst and rest all at once.

Brown is known for his original style, which incorporates drawing, digital manipulation and intuitive painting. Past series of surreal, flattened, digitallooking compositions were characterized by figurative qualities. For this exhibition, “A Glimpse of Smoke Compels my Eye to Blossom,” Brown followed up his interest in distorting facial anatomy with an exploration of flowers and still life. As Untitled (2011) demonstrates (all works that appeared in the show are untitled), Brown has moved away from digitized imagery and toward organic forms situated on flat, painted swathes that resemble elements of collage. The depth created by the articulation of form and ground suggests that each is its own entity, which has been placed, rather than painted, onto the canvas. As with all five paintings that appeared in this show, this work’s content is centred on the canvas and placed onto a soft, stain-like background.

The painting is captivating for its complexities. A grouping of bulbous spheres floats in the centre of canvas, like the interior of a tropical flower. From top to bottom of the front-facing “bouquet,” each sphere increases in scale. Grey, mauve and pink coalesce, reflecting light from the glowing background. The exterior edge of the whole group is articulated by traces of underpaying, resulting in a sharp outline that creates a pasted-on effect. Restrained by irregular shapes and blocks of colour that fade in from the background and Intersect the centre like slashes, the bouquet is held in place. All these shapes rest on a scythe-like form that arcs across the bottom of the canvas.

Traditional still life, this is not. However, the alien quality in what Brown paints reveals his desire to interrogate and learn from the genre. Paul Cézanne sought more from it, flattening arrangements of fruit. Curators attempt to define its contemporary resonance in exhibitions such as “Triumphant Carrot: The Persistence of Still Life,” which appeared at the Contemporary Art Gallery last year. Brown has taken this established language and given it new parlance. He is a painter tackling approaches that are embedded in the history of his media and he is proving them ripe for new interpretations.

It is fitting that this exhibition showcased vigorous paintings that left the viewer questioning. This will be Matthew Brown’s mark on Vancouver: in May, he departed for new challenges in Toronto, while 304 Days, an artist-run curatorial project that operated for the length of its name, closed its doors. 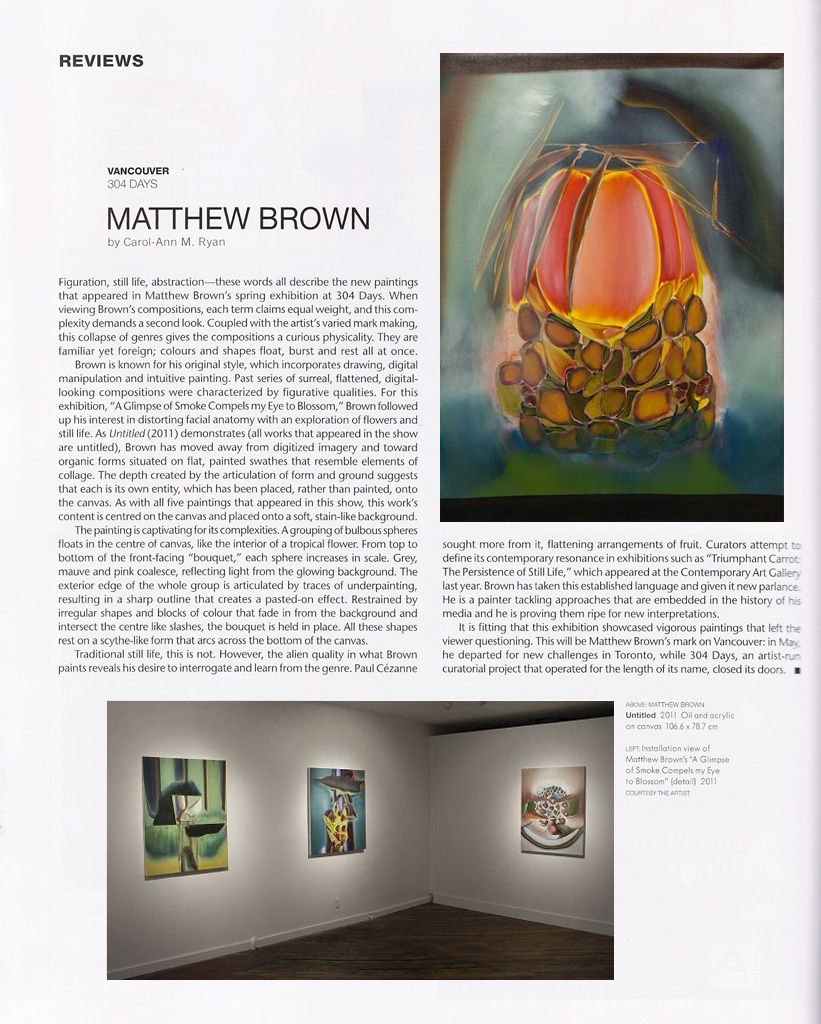