With centuries of accumulated precedent, arguably all painting now looks overly familiar. This implies a kind of uncanny imperative when contemporary painters can distance both themselves and their audience from what they know as a means of reinterpretation. I use the term “uncanny” because it is intimately bound to the idea of experiencing the familiar in unfamiliar ways, as in Sigmund Freud’s definition of the uncanny as the unexpected return of something repressed from memory. Perhaps it is the task of painters to simultaneously repress and celebrate their material.

Vancouver painter Matthew Brown makes work that evokes various liminal associations in his alien but uncannily familiar canvases. What he most literally represses and celebrates is the human body. At first glance, his oil and acrylic canvases may appear to be manga-like abstractions or cartoonish digital bri-à-brac converted into paint. However, it soon becomes evident that these conglomerations of sharp shapes and runny smears are bodies of some sort, humanoid or anthropomorphic, and the viewer is invited to animate them. This desire to animate the inanimate and to see ourselves mirrored in the material of the world, reflective or not, seems to be a common human impulse, which inevitably gives rise to uncanny experience. It is this perceptual propensity that Matthew Brown exploits in his show of new paintings at the Tracey Lawrence Gallery.

In Freud’s discussion of the uncanny, the original German term he used was unheimlich, which has no direct English equivalent but literally translates as un-homely, meaning outside the comfortable familiarity of home. He described the uncanny as unsettling, not simply because it is unfamiliar, but because it is instead the unexpected reappearance of something intimately familiar. Brown’s odd characters deliver the sharp sensation of things seen before but rendered freshly alien, and require active viewer participation to make sense of them. This pertains both to the figurative content and the paint handling itself. It is exceedingly difficult to make oil paint look unfamiliar after more than 500 years of continuous use, but Brown achieves this to some degree through an explicitly digital sensibility. These paintings could not have been painted even three decades ago. They are the product of someone weaned on anime, video games and home computers. What we see mirrored in his paintings is a digital sensibility permeating contemporary Pop culture, but presented as painting in a way that is unfamiliar.

His engagement with the digital is in fact a literal collaboration. He begins his painting process with doodle-like line drawings he feeds into a computer and then reconfigures based on pre-programmed guidelines. Despite the parameters, the results are essentially unexpected. The computer functions as a surrogate human partner or even a parallel form of the ultimate source of generative information — nature. He then transfers the fresh drawing to canvas and builds up his painting through an imaginative, rather than referential, process.

Though his actual collaboration with a computer is over at this point, his paint application is awash in digital signifiers. In a work like Voykin C, a green, cat-like figure rests opposite a ghostly blue shape and a pair of large red eyes appears to loom over the proceedings. What could be the body of the cat, or even a strange moustache shape in its nose area, are reminiscent of “artefacts,” the leftover fractal junk produced by image processing software (bits of stray digital information that mutate into odd incidental forms). Within the context of these images, the runny drips of paint seem like a kind of analogue equivalent to digital artefacts; they too are leftover incidental shapes resulting from process. These clear drips, particularly in the looming red eyes, are in sharp contrast to the fuzzy black line running down in the background. Here,Brown mimics the blurring effect of lens focus or depth of field. Although the technique of surface blur has its roots in da Vinci’s concept of “sfumato,” or atmospheric perspective, in Brown’s painting it feels more like the “air-brush” option from Photoshop. This association with screens or monitors is further extended through his use of synthetically acid colour. The effect of all these disparate elements brought together in a single pictorial space is coherent, yet discordant enough to prevent a crystallized sense of narrative interaction between the various elements.

His use of multiple characters in each canvas is new in this show and evokes narrative tableaux more than his previous work, which was centred on single totemic figures more directly related to portraiture. Despite the novelty of his digital sensibility, his use of traditionally delineated genre, scale and figure/ ground relationships is exceptionally conventional and familiar. Though he may be a product of the digital age, he is working very much within the parameters of Renaissance painting. He renders these traditional norms so strangely that they appear extraterrestrial and unsettling. What kind of characters are these? It might be too facile a comparison, but they have a totemic quality reminiscent of the First Nations iconography that is inescapable in his home city of Vancouver. If not actually influenced by these sources, they share with traditional totems the capacity to function as a medium or vehicle of viewer identification. Do his peculiar hybrid creatures watch us, or do we watch them? What makes them “alive”? What are they doing with each other? Perhaps what they elicit is a reminder that what we may think belongs to past experience, whether personally or culturally, has actually only been repressed and transfigured. This mode or quality, or thing, still lurks within the margins of perception, reflecting ourselves in uncanny fashion.

“Matthew Brown” was exhibited at Tracey Lawrence Gallery in Vancouver from November 9 to December 22, 2007. 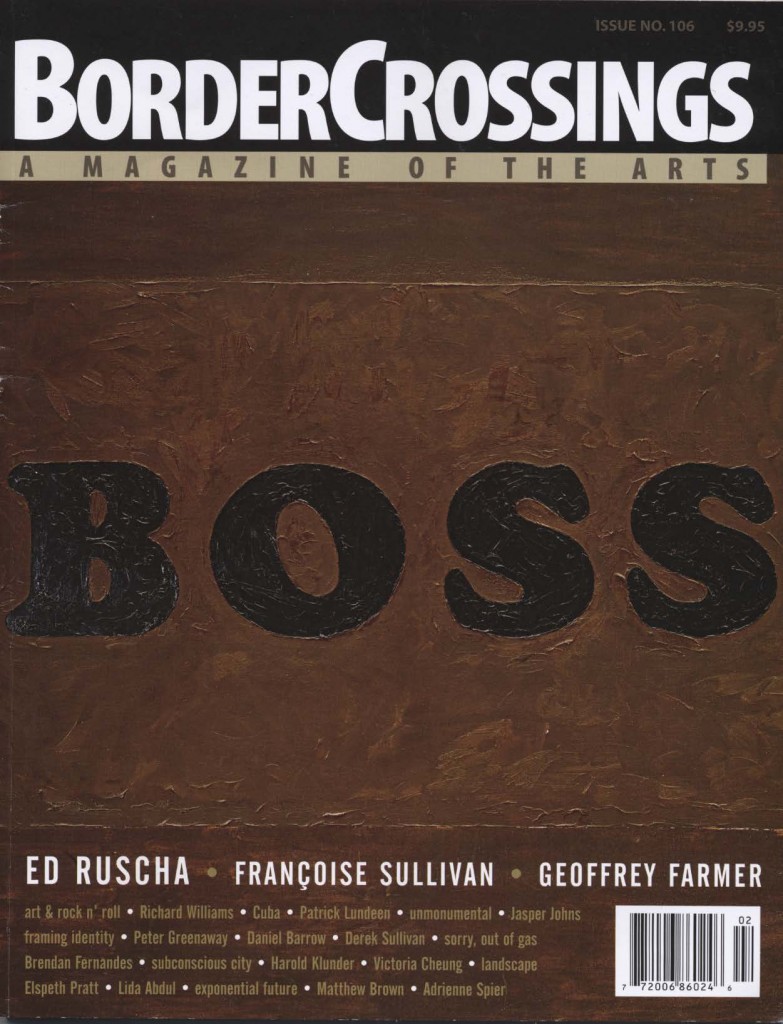