Homemade Polygons is an exhibition of five young artists curated by Vancouver novelist Lee Henderson. Artistsin this show include Eli Bornowsky, Matthew Brown, Mark Delong, Joey Haley, and James Whitman. The author of The Broken Record Technique, Henderson has assembled a fresh look at painting and drawing in this exceptionally strong group show. In our digital age, “homemade” may carry connotations of the jerry-rigged or amateurish: but for Henderson, and the artists assembled here, a defiance of the status quo goes without saying.

Just what is that status quo that these artists are working against?

Henderson provides some clues in a curatorial statement slipped into the back of the polyurethane sleeves holding price lists in the gallery. For while the works here are not the usual digital art of touch screens and viewer-activated video projections, there is a deeper connection to the computer and web worlds of anything-goes.

“The Internet is so beyond the tipping point it seems like drowning just to attempt to wade into the pool,” Henderson writes, but “we live in a new Spain, designed to be a more stable, sustainable anarchist state for information, and industry and ideas.”

How does the art stack up against this utopian vision of technology?

Bornowsky’s two acrylic paintings are the first works you see when you enter the gallery. One is called Untitled and the other Woodpecker. They resemble the mid-century modernist Piet Mondrian, whose large canvases of small blocks of colour sought to reduce painting to line and colour, abstracting these basic elements from realism.

Bornowsky says that he is interested in looking as an activity, finding order in chaos in a way similar to how he listens to electro- noise bands like Autechre.

Like noise music, Bornowsky’s paintings are cacophonous: it is as if a Mondrian painting were laid on to a cardboard box and then flattened.

We also see strips that resemble colour bars from computer programs or paint stores. Up close, the op art, or optical illusions, breaks down as the lumpy, freehand painting style reveals its process to the dedicated eye.

Bornowsky’s paintings also float freely on the canvas: the colour forms never reach the edge, and thus the painter substitutes his edges for those of the canvas itself.

Brown notes in his artist’s statement that his paintings are based on portraiture and “notions of the uncanny.” This is an idea from Freud, who said that we are particularly bothered or upset by something that looks almost right but is a bit off-kilter.

Brown draws quick portraits with what he calls the “drunken method,” perhaps referring to the Shaolin monks who would practice their self-defence while wasted. Brown then scans the portraits and uses a randomizing code he developed for PhotoShop, introducing unplanned variables that he then turns into large paintings.

Like the surrealists who sought to escape the control of their artistic intent by drawing from dreams, Brown’s process allows his paintings to be both familiar and bizarre at the same time. Thus his painting Zack, for instance, features what could be a head with gaps around one eye and a mouth that could be a compressed map of the nighttime sky.

Untitled, December 2005 is an even more radical departure from figuration and seems to have split the image like a Rorschach blotch. Marrying his quick hand (also a way to evade an overly finicky intention or will) to the unknowable machinations of the computer, Brown produces paintings that are creepy without being cold.

Delong works mostly in collage. He sometimes collaborates with Jason McLean and may be considered as the dark side of McLean’s cheerful exuberance. His large wall of 60 collages isn’t so much “in your face” as “fist inyour face.” Phrases such as “hippie scum” and song titles from old ragtime sheet music make for an eclectic and electric combination of colours and hand-lettered sayings.

Delong says that when he assembles fragments for collage, he intentionally omits colour magazines, or Xeroxes them in black and white, so as to avoid the too-familiar colours of glossy printing.

Delong’s large collage, New Brainwork, is accompanied by a CD of music by Creedence Clearwater Revival, the rhythm of which inspires Delong as he works in his studio. And there is definitely an air of passe hippiedom to his work, a bitter glee at how wrong things have gone for the Sixties generation.

Haley is represented in this show by both drawings and paintings: his drawings are much more successful than his paintings which have a half-assed surrealist look to them that pales in comparison to Brown’s right next to them.

But Haley’s drawings are funny and light in their open composition.

For sheer drawing output, however, Whitman’s two large works, a diptych called Double Portrait and Riverbed, are without compare. The Double Portrait, in particular, is a frazzled pair of Pippi Longstockingesque sunflowers — or perhaps eyeballs on optic nerves – - in a landscape of labouriously drawn trees and foliage. The tension in the work between detailed plants and expansive starbursts around the figure’s heads, as well as the numerous erased indentations, give the drawings a feeling of all-nighters fuelled by Red Bull.

You can almost feel Whitman’s neck crack as he looks up to see yet another dawn makes its way into his studio.

Clint Burnham is a Vancouver author and educator. 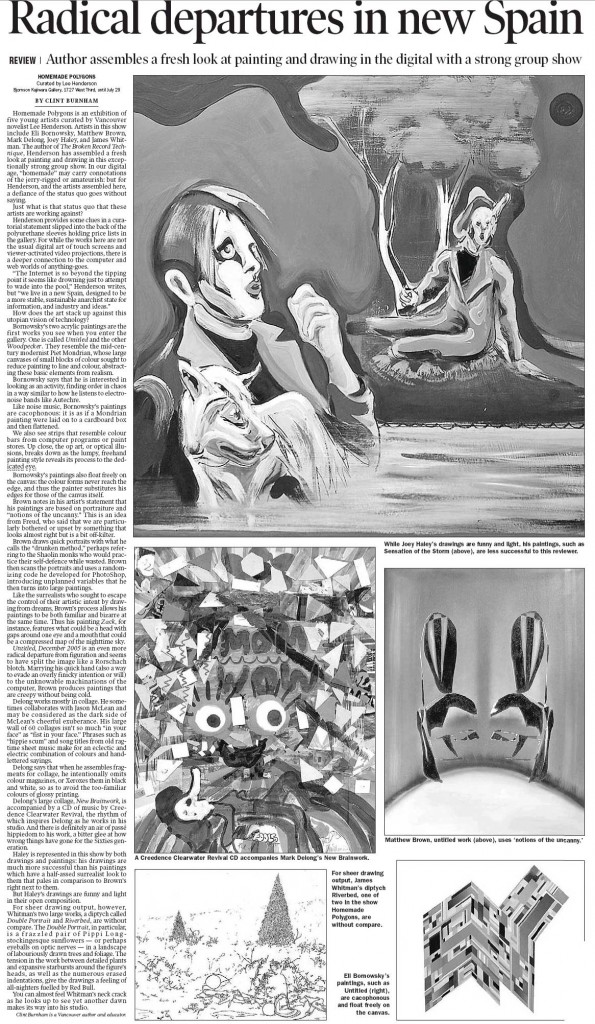