The very strange paintings making up this exhibition by Vancouver artist Matthew Brown - which, titled The Mouth of a Monk Is Like an Oven, is surely the most irritating but appealing title of the year – are deliciously ugly, sensuously off-putting, and winningly alienating.

The paintings come about as a result of the artist’s having doodled his way into a world of image-processing software procedures and then remaking his now software-reconfigured drawings as paintings on canvas. Asgallery owner Clint Roenisch notes in the show’s press release, the new computer-masticated images Brownemploys as the basis for his work are “painted onto canvas through an imaginative filter rather than mimed exactly.”

Imaginative filter indeed. Brown’s otherworldly paintings appear to be of figures – isolated, rather totemic figures – but then not really. They are upright configurations that stare blankly back at you – but with what are not really eyes, and therefore with what are not really stares. Painting in pigment that is alternately gorgeous and then, suddenly, thin and cheap-looking, and in colours that are distressingly likely to change from lambent to laboured at a moment’s notice, Brown confounds even the skill with which most painters who have it are gratefully stuck.

As writer Lee Henderson notes, in a brilliant essay about a recent show at Vancouver’s Tracey LawrenceGallery, “Brown’s paintings are not precisely abstraction, and they are not figurative either. Not descriptive, not narratively driven, not purely organic, but not altogether synthetic. …” Henderson goes on to point out thatBrown’s paintings are “not easily reducible images, they do not mount any grand proposal, and they are not easily thematized. They are,” he reports grandly, “paintings full of nots.”

Their being so provocatively not-endowed gives them an alarming kind of newness. They look like nothing else but themselves – no small accomplishment in these days of aesthetic retreads, revisitations, homages, allusions and appropriations. No, Brown is violently his own man. Henderson characterizes the paintings with economy (and invents the best simile ever to assist him): “The organizing principle behind Brown’s work,” he writes, “is not familiar, but the imagery somehow is. Like looking at your mother’s sister.” 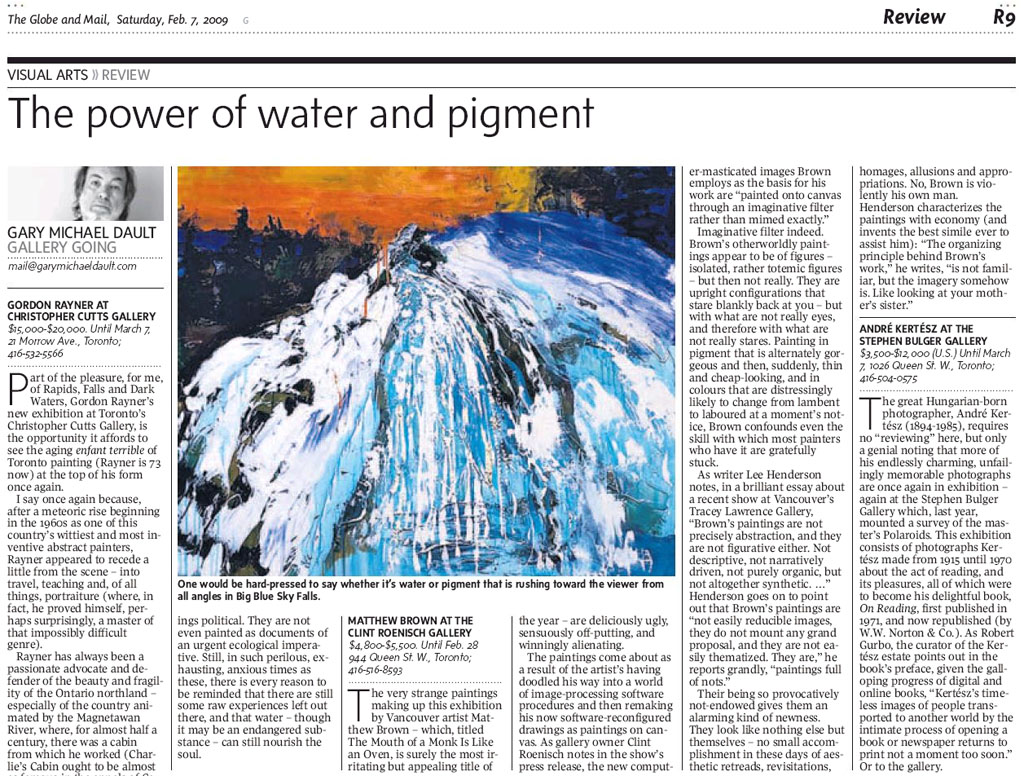