Named for the cheap wood-pulp paper upon which they were printed, pulps were mass-produced fiction magazines and paperbacks that titillated and thrilled. As this exhibition’s curator, Corinna Ghaznavi, writes, they were “a ‘good read’ but lacking in literary weight.” “Pulp Fiction,” at Museum London, gathers drawing, collage, animation, installation and sculpture by 14 young artists who share a predilection for surrealistic subject matter, free-associative process, hand fabrication and references to both high art and lowbrow culture. Though Ghaznavi makes no mention of geographic affinity, many of the participants, such as Jason McLean, Mark DeLong, Marc Bell, the five-person collective The Lions, Amy Lockhart and Shayne Ehman, have been at some point part of a community of artists based in Vancouver who frequently collaborate in ad-hoc arrangements outside the purview of art institutions. As an alternative to Vancouver’s well-known highly theoretical artistic discourse, drawings, doodles and zines have emerged as both an aesthetic and a social project, offering highly imaginative expressions of both personal and interrelated subjectivities.

As is often the case when small artworks meet the white cube, the overall installation of “Pulp Fiction” feels bare and sparse in contrast to the wonderfully chaotic, manic compositions on display. Peter Thompson’s colourful stream-of-consciousness work sets a fanciful tone. Thompson and Marc Bell’s rendition of The Hobbit consists of a series of delicate drawings that coalesce in Escher-like optical illusions, with meandering snippets of text that oscillate between hilarious and bewildering. Bell’s sculpturally inclined collage and patchwork cardboard constructions offer nonsense gags, like Tim Ho-ton: “over 5 locations worldwide.” Wispy, abstracted pencil drawings from The Lions faintly hint at characters and narrative.

In collaborative and solo work from Jason McLean and Mark DeLong, painted doodles and oblique phrases embellish the surfaces of a variety of quotidian objects: vanilla-pudding packages, a suitcase, hockey cards, a baseball and gloves. Reminiscent of the fragmentary wordplay of the Surrealist exquisite corpse, DeLong and McLean’s personal, diaristic imagery (like that of Bell and Thompson) suggests the interplay of anecdotes, observation and the absurd.

Funny, fantastical animation is a highlight of the show. In Amy Lockhart’s whimsical Walk for Walk, grotesquely cute characters float across the screen, buoyed by cloyingly sweet sound effects. On the opposite wall is Seth Scriver and Shayne Ehman’s remarkable roadtrip chronicle Asphalt Watches, flanked by car hoods airbrushed with various unsavoury googly-eyed characters. Unfortunately, the projection is dim and unsuitably installed under bright lights, diluting the enchanting quality of the film’s saturated colours.

For all of its visual pleasures and eccentric delights, the show ultimately doesn’t do justice to the work’s social and material dimensions. The exhibition is ostensibly interested in materials (pulp and paper?), but we don’t learn about the processes particular to these artists or the rich collaborative practices on display. The lack of contextualization is disappointing. While inviting aesthetic appreciation, “Pulp Fiction” misses the compelling social dynamics at play within this contemporary generation of so-called pulp writers. 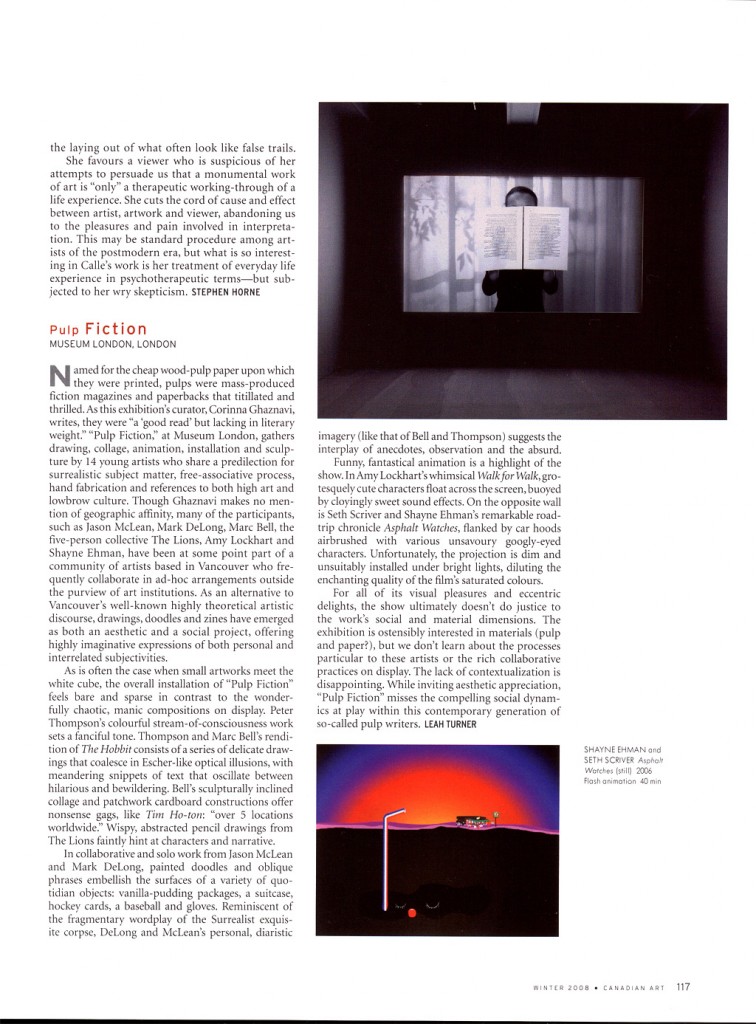