At the Vancouver Art Gallery until September 5

Unreal is one of those useful counterculture words that describes many states. It can denote psychedelic hallucinations of the melting-face variety, and it can also signal disbelief that a real-life situation—unmediated by drugs, booze, or fever—could so little resemble, well, real life. Unreal serves as the title of a big hodgepodge of an exhibition that anticipates what should be the Vancouver Art Gallery’s summer blockbuster, a survey of historic surrealist art that opens in May.

Of course, surrealism was a 20th-century movement that peaked in Europe between the world wars, and Unreal looks mostly at contemporary non-European art. It’s been curated from the VAG’s permanent collection, which is a reasonably frugal way to fill up the entire third floor of the gallery, and has been supplemented with loans from other public and private collections. Together, these 140-plus paintings, drawings, prints, sculptures, assemblages, videos, and altered photographs constitute a visual experience of the unsettling, uncanny, and unpredictable variety. Also, the weird, the fantastical, the absurd, the grotesque, and the occasionally disturbing. From Al Neil’s partly funny, partly sinister headdress made out of junk to Ed Pien’s ink drawings of carbuncle-covered and many-eyed ghosts, and from Annette Messager’s relief sculptures, whose fishy bodies are half composed of women’s eyes, to Marina Roy’s animated video of butterflies, blood, and bulbous tumours, the show makes a strong bid to disrupt our complacent ways of perceiving the world.

As with surrealist art, the work in Unreal looks as if it emerged from the artists’ unconscious minds, challenging the rational and the controlled, tapping into the uninhibitedly imaginative. One of the surrealists’ techniques is automatism, in which an artist lets the brush, pen, or pencil make its way across the surface of the work without trying to consciously control what it is doing. Such is the apparent influence in Jock Macdonald’s three little 1946 watercolours, with their whimsical scenes of birds, insects, and biomorphic abstractions. More recently, it looks as if Jason McLean also gives himself over to automatic impulses. In No Comment, his ink drawings spontaneously riff on and rap off a wide range of found texts. What coheres in this mesmerizing, multicomponent work is an exploration of place, of a cityscape that is both physical and psychological.

Another strategy of the surrealists and their Unreal spawn is the juxtaposition of disparate forms and images, through collage, assemblage, and the kind of naturalistic rendering of completely non-naturalistic scenes we associate with Salvador Dali. This conjoining of disjunct and seemingly incompatible images is the practice we most identify with the “surreal”—except when we’re looking at preindustrial cultures. Say you plunk a horse’s head on a human body, as Marcel Dzama does in his untitled ink, watercolour, and root-beer drawings. You might be creating a nightmarish monster fraught with sexual power to titillate collectors. Or you might be invoking a belief system manifest in human-animal transformation stories and rituals, the kind that are evident in Inuit artist Simon Tookoome’s prints from the 1970s.

The inclusion of Inuit art in Unreal is a bit troubling. Yes, the surrealists were powerfully influenced by the aboriginal art of Africa, Oceania, and the Americas (something the recent Man Ray show at UBC’s Museum of Anthropology examined), but the VAG show is largely and significantly contemporary. Our present-day understanding of nonwestern art has shifted away from what the modernists regarded (and appropriated) as “primitivist”. What is unreal in some cultures is spiritual belief in others.

Although perhaps the message we’re supposed to glean here is that the ecstatic experiences of shamans and spirit-questing initiates equate with those of agnostic artists messing around in the unconscious. So go ahead—dance with the man with the horse mask on his head. Just don’t take him home to meet your father. 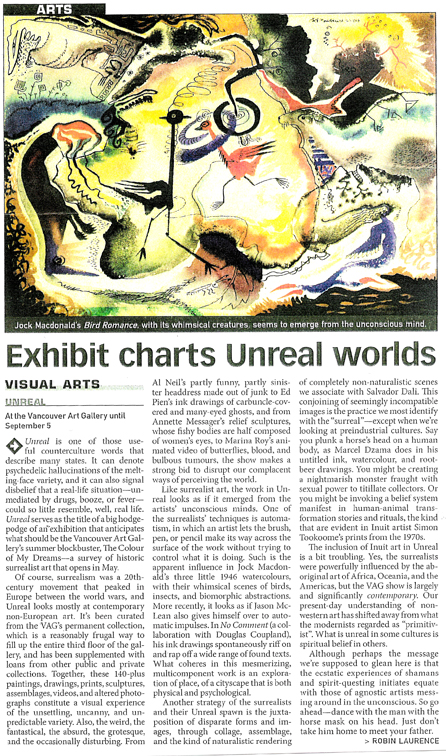